With InEpact Powerbox technology it is economically viable to produce electricity even from individual geothermal wells with temperatures from 70-160 °C and heat power from around 5 MW.

More than 50 % of all energy used in industrial processes is lost and not used today. InEpact Powerbox can be used to generate electricity from e.g. industry cooling, pressure reduction of steam, flue gases as well as waste heat and steam.

A huge potential for InEpact Powerbox as both the engine cooling, and the exhaust gases can be used for generating electricity. The heat transfer to InEpact Powerbox can be through hot water, thermal oil or steam.

InEpact Powerbox can be used in a variety of applications because of the modularity in the design and the impressive range of sizes, it can be used without major modifications.

More than 50 % of all energy used in industrial processes, electricity generation and transportation is lost and not reused today. Wherever there is waste heat currently just emitted to the surroundings, this energy can instead be used to generate electricity, without emitting greenhouse gases.

This means that many industries such as marine and process industries that produce heat as a byproduct can take one step in the direction of becoming climate neutral, or better yet, climate positive.

Geothermal heat has been used as energy source for a long time, and in recent years new technology with higher efficiency rates has meant a renewed interest in this energy source. Many countries have realized this potential and are now giving incentives to encourage green/renewable electricity generation.

InEpact Powerbox can be used in a variety of applications, because of the modularity in the  design and the impressive range of sizes, it can be used without major modifications.

with an 800 kW Wet Steam Turbine 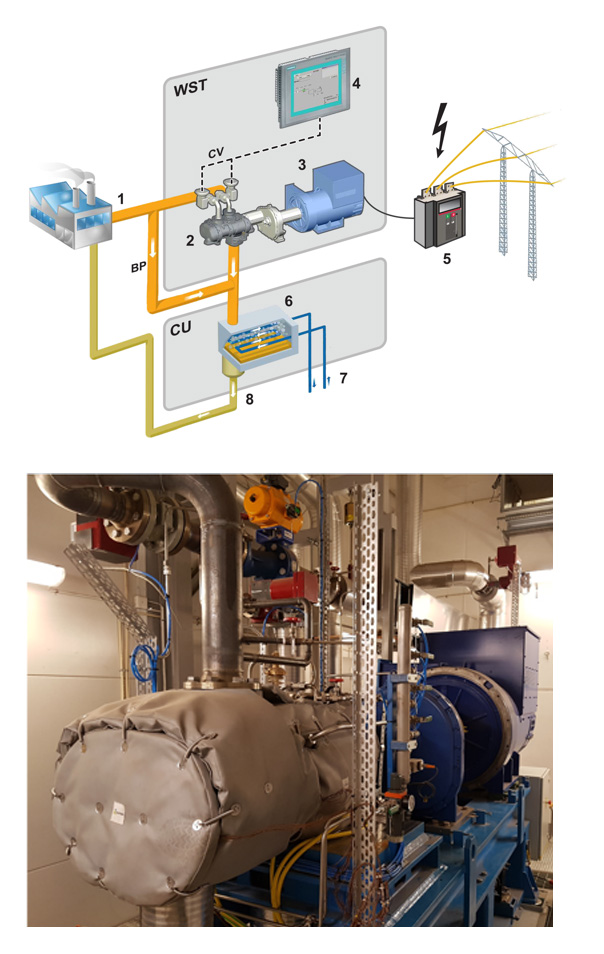 An existing heat plant was converted to a combined heat and power plant by modifying the boiler and installing an InEpact Wet Steam Turbine. In the limited space of the existing hot water boiler, superheating was never an option. The cheaper solution with saturated steam production was chosen.

The saturated steam expanded in InEpact’s Wet Steam Turbine (WST) that is of screw turbine type. In opposite to most turbines on the market the screw turbine is not subject to water droplet erosions. The wet steam is condensed in a district heating preheater.

In addition to the primary benefit of power production, the WSTs heat consumption increases the boilers yearly time of operation by a few weeks. Thus enable more district heat to be produced cheap and eco-friendly, instead of earlier starting up smaller units for the low load summer operation. 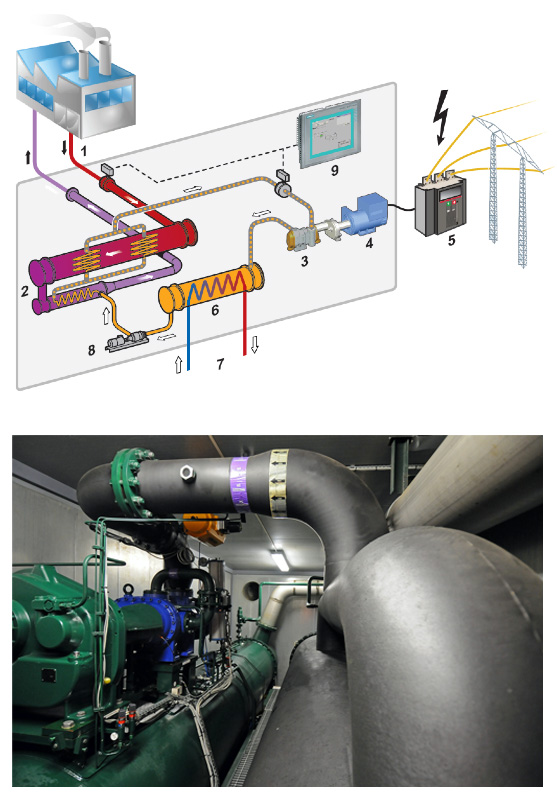 The steady supply of warm water from the paper mill was previously cooled away at a cost, but now InEpact’s ORC-unit utilize it to produce useful electricity.

The ORC-unit is like all InEpact’s ORC-unit’s custom made with regards to turbine size, heat exchanger design and overall footprint of the unit.

For this installation, ammonia is the working media in the Organic Rankine Cycle, but InEpact always select best suitable working medias based on thermal conditions and client’s requests.

with a 230 kW Wet Steam Turbine 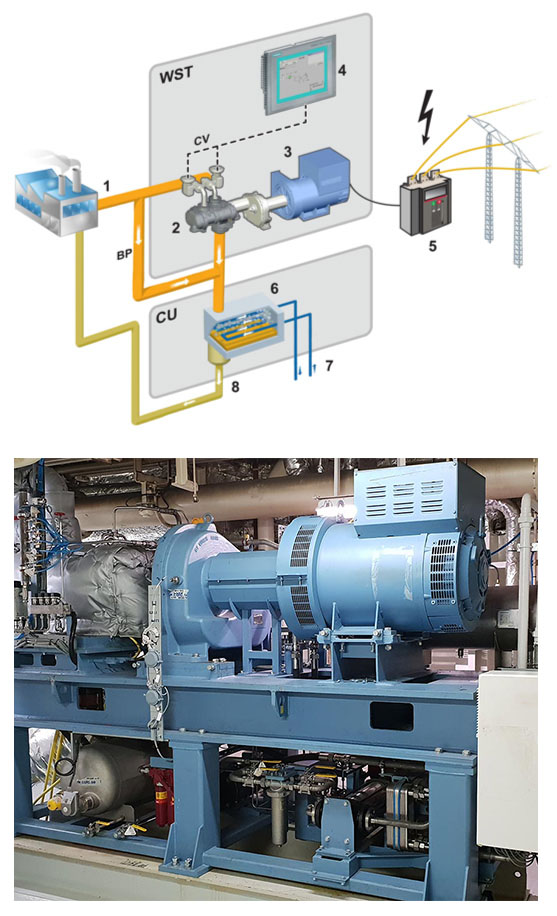 The ship’s engines can operate with impressive efficiency and roughly 50% of the fuel’s energy is converted to shaft power to run the ship. However, of the remaining 50% released energy, only a portion can be used for internal heating etc. and the rest is wasted.

By cooling the flue gas with a saturated steam generator, InEpact’s Wet Steam Turbine-unit can utilize some of this waste energy to produce electricity that is needed onboard. This will reduce the ships fuel consumption.

InEpact has customized this installation to Marine standards and challenges with regard to component selections and a design modified to given space.

We use cookies on our website to give you the most relevant experience by remembering your preferences and repeat visits. By clicking “Accept”, you consent to the use of ALL the cookies.
Cookie settings Read More
ACCEPT
Manage consent

This website uses cookies to improve your experience while you navigate through the website. Out of these, the cookies that are categorized as necessary are stored on your browser as they are essential for the working of basic functionalities of the website. We also use third-party cookies that help us analyze and understand how you use this website. These cookies will be stored in your browser only with your consent. You also have the option to opt-out of these cookies. But opting out of some of these cookies may affect your browsing experience.
Necessary Always Enabled

Performance cookies are used to understand and analyze the key performance indexes of the website which helps in delivering a better user experience for the visitors.

Analytical cookies are used to understand how visitors interact with the website. These cookies help provide information on metrics the number of visitors, bounce rate, traffic source, etc.

Advertisement cookies are used to provide visitors with relevant ads and marketing campaigns. These cookies track visitors across websites and collect information to provide customized ads.

Other uncategorized cookies are those that are being analyzed and have not been classified into a category as yet.